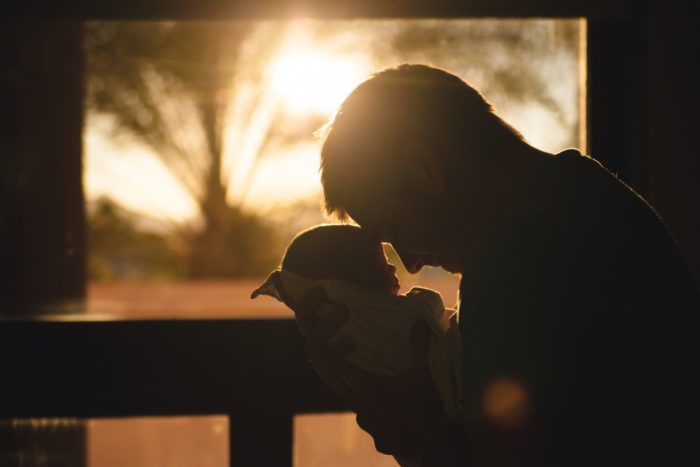 It’s PNDA awareness week. This year’s theme is “I wish I knew”. So I thought I’d write a post about something that I wish people knew about PNDA.

Close your eyes and picture someone with postnatal depression.

Though the person in your mind might vary in lots of different ways, chances are, the person you were picturing was a woman.  Because mostly when we think of postnatal depression, we think about mums.

But mums aren’t the only people who can struggle with the adjustment to parenthood. Postnatal depression can affect dads too.

Whether it is the shift in relationship dynamics, the added financial pressure of being the sole income, or the sleep deprivation (dads feel it too), life for a new dad can be tough.  Dads can also struggle with feelings of guilt and inadequacy, particularly when they see their partner having a rough time.

So here are 10 things I wish everybody knew about postnatal depression in dads.

1. Men’s risk ofdepression doubles in the first year of being a dad.

A man’s risk of becoming depressed in the first year of fatherhood is double that of the general population.  First time dads are particularly vulnerable. And depression doesn’t necessarily wait until baby arrives – one in ten dads-to-be will also become depressed during their partner’s pregnancy.

2. We’re on this ride together.

Postnatal depression in dads is more likely if there is maternal postnatal depression.  If one of you is having a hard time, it’s likely that the other is too. In families where mum has a diagnosed perinatal mental health concern, it’s estimated up to 50% of dads will also meet criteria for a mental health concern.  This isn’t to say that a woman’s PND causes her partner’s depression. Likely you are both experiencing many of the same psycho-social factors that contribute to BOTH of you having a hard time.

The peak time for postnatal depression in men is between three and six months post birth.  Unlike women who should (might) be regularlyscreened during pregnancy and postnatally, dads might not be asked how they arecoping emotionally with the transition to parenthood.

As with postnatal depression in mums, depressive symptoms in dads often go unreported.  Dads can often mistake the symptoms for the everyday stresses of having a newborn.  There can also be a lot of stigma for men experiencing postnatal depression, as they can feel the cultural pressure of needing to ‘hold it together’ for their family.

There are a wide array of symptoms that could indicate that a dad might be struggling with postnatal depression or anxiety.

These symptoms can be physical:

Many people are surprised to find out that men go through hormonal changes in the perinatal period as well. It is thought that these hormonal changes that are designed to help dads bond with their babies might also make postnatal depression in dads more likely. Hormones including testosterone, oestrogen, cortisol, vasopressin, and prolactin may change in dads during the period after their babies arrive.

6. There are a range of factors can increase the risk of postnatal depression for men.

Young dads (under 25) are at greater risk of experiencing postnatal depression than their older dad counterparts . Other major risk factors include: a history of depression and anxiety; having a low income; and not being in a relationship with the child’s mother.

Pregnancy complications, birth trauma, or having a baby in the special care nursery or NICU can also impact paternal adjustment.

Other factors that make postnatal depression in men more likely include: sleeping or crying issues with the baby; drug abuse or dependence; and feeling unsupported by their partners.  With these issues, it can be harder to tell the direction of the relationship.  Is it PND that contributes to relationship difficulties, or is it the other way around?  Similarly, does having an unsettled baby contribute to depression, or are babies of depressed parents more unsettled?

Postnatal depression in dads can place a strain on their relationship with the baby’s. It can also affect the relationship they have with their child.

Depressed fathers tend to play and engage less with their children and talk more negatively about them and to them. They are less likely to sing and read to their children, and more likely to discipline them harshly.

8. Untreated postnatal depression in dads has consequences for their child.

Dads’ depression isassociated with emotional, social and behavioural problems as well as developmentaldelay in their children. The association is stronger when a father experiencesantenatal and postnatal depression, and when his symptoms are particularlysevere. It’s also a stronger association when the mum is also diagnosed with aperinatal mental health issue.

This isn’t about shaming dads or making them feel worse, but to highlight that it is important to get help, not just for your own wellbeing, but also the wellbeing of your children.

The practice guidelines for treatment of postnatal depression are the same for dads as for mums. These treatments might include talking therapies with a psychologist, or management with medication.  Dads also benefit from building social connections with other dads, and increasing paternal confidence through parenting programs such as circle of security can be a great addition to your parenting toolkit. Relationship counselling can also help to improve communication and re-stabilise your relationship.

One of the tricky things about having depression and/or anxiety as a new or expecting parent is that many symptoms can look similar to what most people experience at this time: feeling tired, a bit irritable or emotional, or worrying about baby’s health.  To see if what you’re experiencing or observing in a loved one could be a reason to seek help, you can fill out a short mental health checklist on the PANDA website: https://www.panda.org.au/info-support/checklists

Please respect the work of authors, photographers, and artists. You are welcome to share provided you include appropriate credit and do not crop out author’s names from quote memes. Thank you.